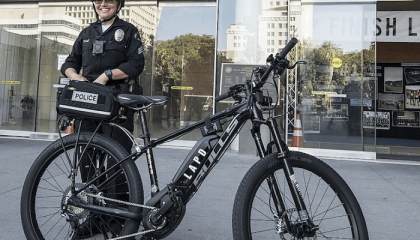 As you may have seen posted on social media over the last few weeks, we had the privilege of delivering the largest law enforcement eBike fleet in the country to the Los Angeles Police Department. While we are very pleased with the bikes, the relationship with LAPD and the credibility this gives us worldwide, we are even more pleased when we know these bikes are working to help officers better serve their community. Here's one account told straight from Sgt. Shannon Geaney of the Los Angeles Police department.

“I am a Sergeant assigned to Hollywood Division, though I am not typically assigned to the bike detail.  It just happened that on the day I needed to attend the Bicycle Officer recertification they were certifying officers on the eBikes.  A few weeks later the eBikes were delivered to Hollywood Station in preparation for the massive deployment required to manage New Year's Eve.  On New Year's Eve I was assigned a squad of bicycle officers, though only two of us were deployed on eBikes.  We were conducting an investigation of a bar-fight when approximately three blocks away officers broadcast a Help Call for a shooting in progress.  Knowing I was likely going to be among the first supervisors to respond, I immediately start preparing mentally while considering our tactical response, the potential for injured officers, the need to direct the response of additional resources enroute, apprehension of suspects, medical treatment to victims, etc....  Needless to say, the last thing I want to consider is my actions being compromised by an all-out sprint response.  Having an e-bike gave me the advantage of arriving prepared to address the immediate situation with focus.

With the traffic congestion of Hollywood, the Bike Squads can typically respond faster than vehicles in short range…the eBikes greatly expand that range.”

Law Enforcement experience indicates that officers on bikes and ebikes are easier for the community to trust because they’re more accessible and there are literally and figuratively fewer barriers to establishing connection and trust. The drawback to traditional bikes for patrol purposes is what Sgt. Geaney alludes to- that officers may arrive drained and unable to respond at full capacity with all their faculties.

Add to this, as Sgt. Geaney further explains, close range response time is often faster on a bike than a cruiser, especially in heavy traffic conditions and that “close range” expands on an ebike. BULLS eBikes as police patrol bikes create a win-win for everyone- officers and community members alike.

For more information on BULLS’ Police Bikes email us.